Staff, Students and Alumni Fly USM’s Flag on the Summit of Mount Tahan on the Occasion of 50th Anniversary of the University 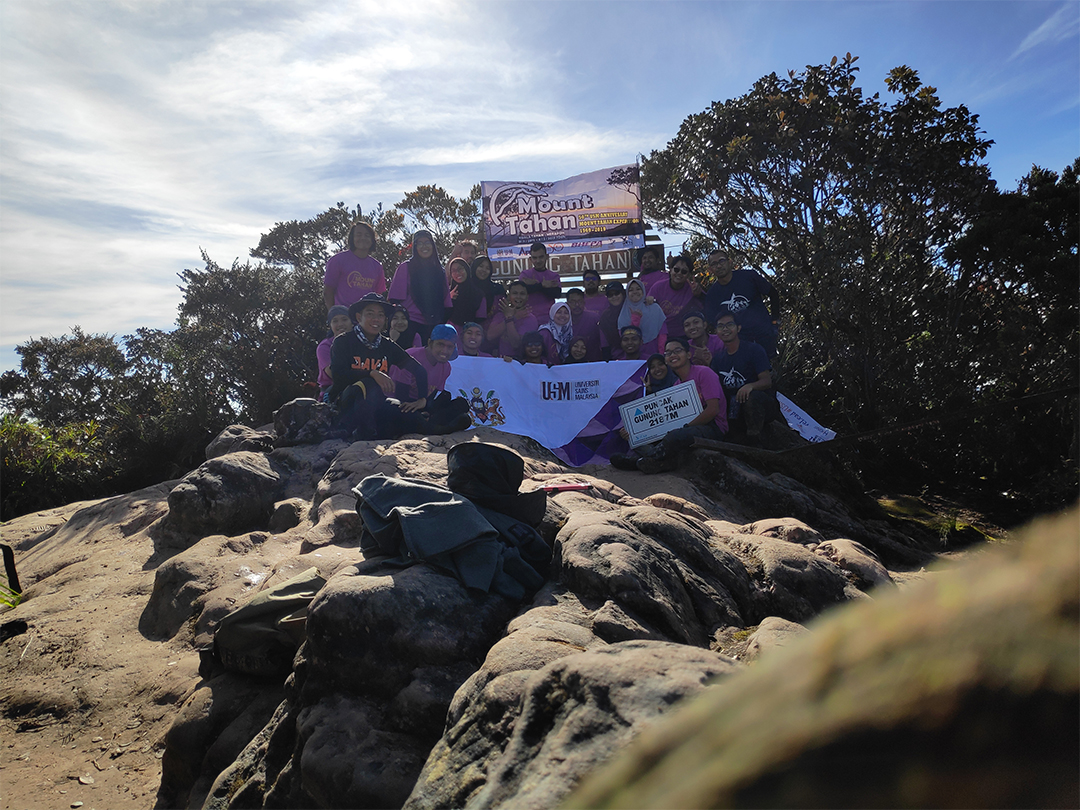 6 February 2019; The establishment of the second public university in Malaysia was decided when the government realised the importance of science and technology to the slowly developed nation in the period between 1950s and 60s. The Cabinet later approved the setting-up of a new university in Penang in 1962 with the creation of the Higher Education Planning Committee to consider the proposal of an institution in the state. From 1962 until 1969, negotiations as well as meetings were carried out with the federal government together with the then Prime Minister, Tunku Abdul Rahman. 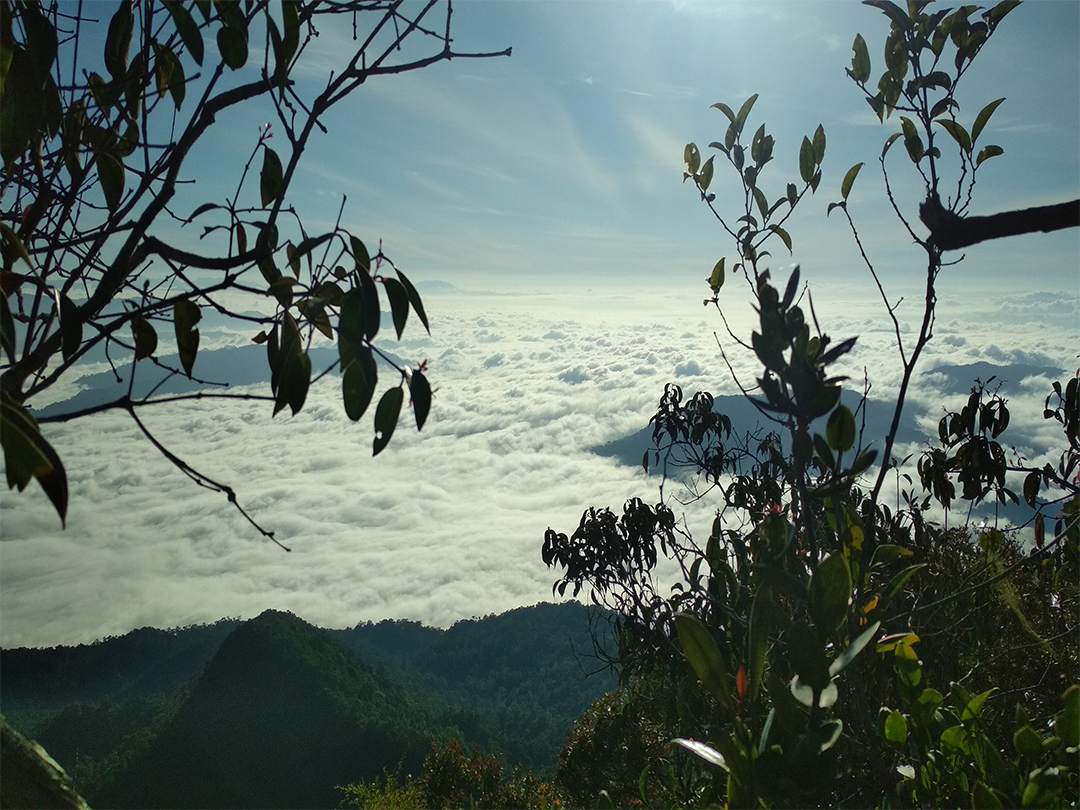 Today, after 50 years, Universiti Sains Malaysia has stood tall together with other well-known institutions around the globe to nurture and provide new knowledge to the generations of the 21st century.

In order to commemorate such a historic event of the university’s Golden Anniversary this year, a group of students, staff and alumni of Universiti Sains Malaysia joined hands to fly the flag of the university on top of the highest summit in the Peninsular Malaysia; Mount Tahan, which stood at an elevation of 2,187 m above sea level. 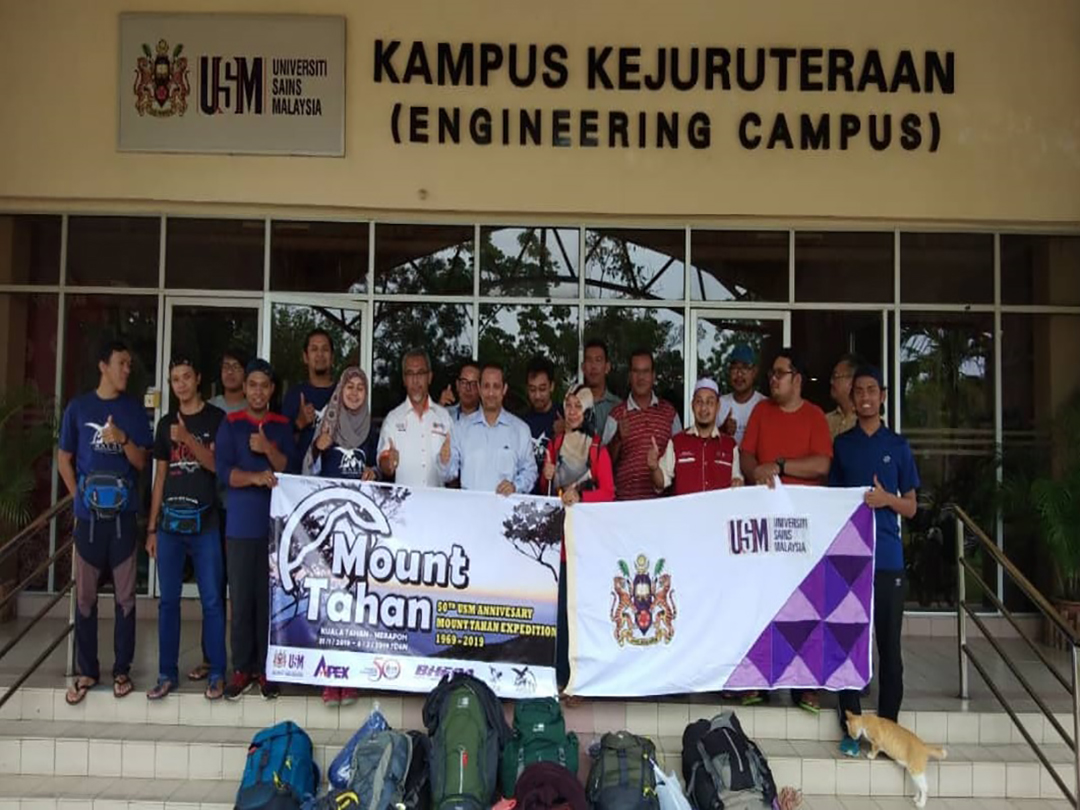 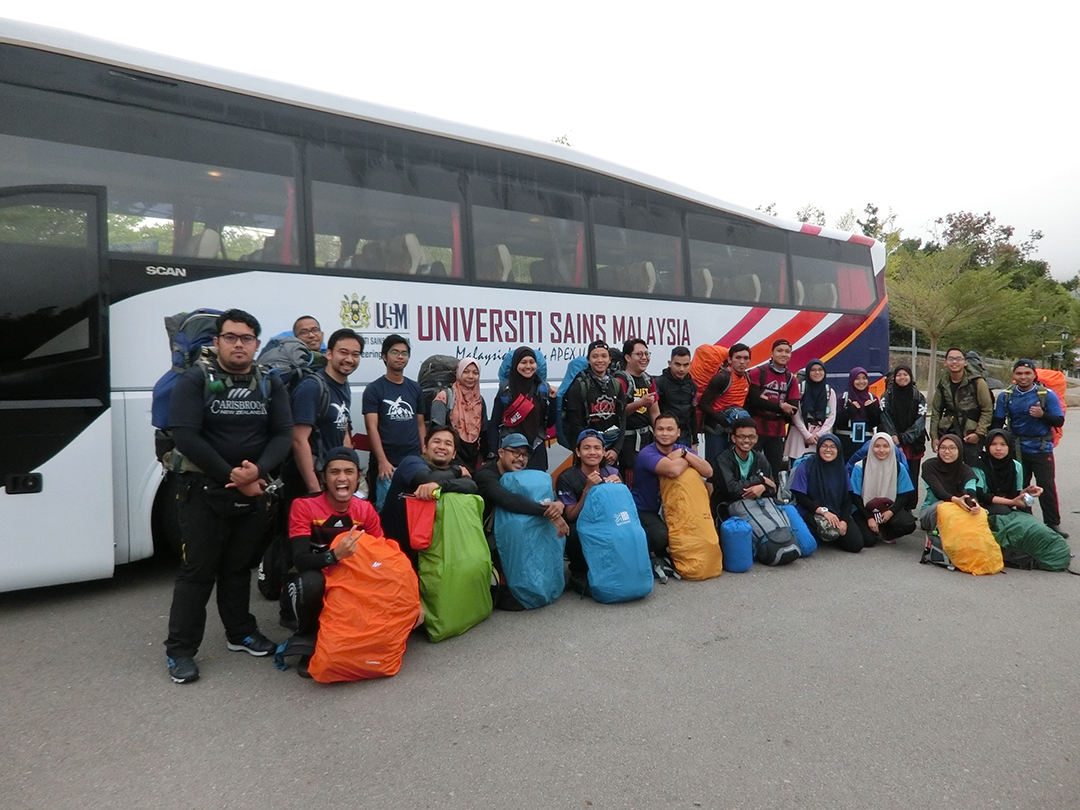 The flag of the University was presented by Ir. Dr. Syed Fuad to the staff representative of the expedition, Associate Professor Dr. Mohamad Hekarl Uzir from the School of Chemical Engineering. The group from Kubang Kerian was led by Associate Professor Dr. Raja Azman Raja Awang from the School of Dental Sciences. Ir. Dr. Syed Fuad also added that this would be the first USM’s 50 Years Anniversary event started by the two branched campuses.

The two groups separately departed from the respective campuses bound for Kuala Tahan in the district of Jerantut, Pahang Darul Makmur at approximately 3 o’clock that afternoon.

The 7-day-6-night trip to Mount Tahan, which was planned from Kuala Tahan and ended in Merapoh, Sungai Relau is the most gruelling route as compared to other hiking routes to the Tahan summit. A total of approximately 90 km trail needs be completed with a number of pit-stops at the specified camping sites. 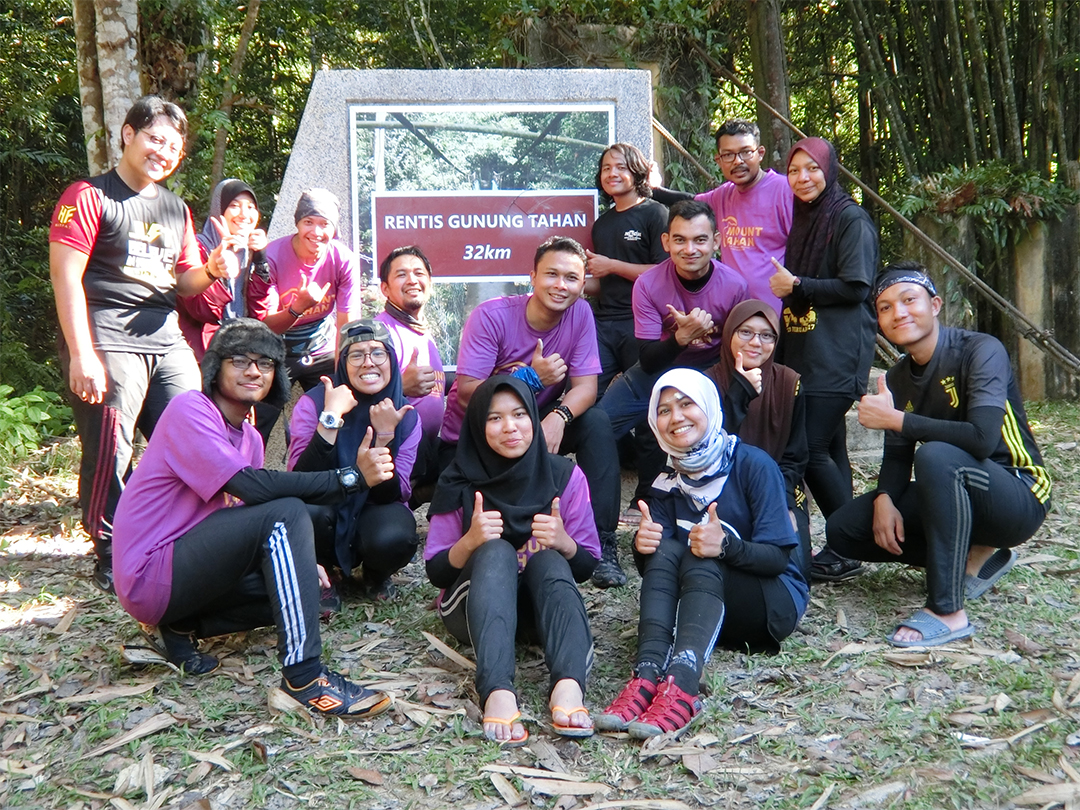 The two groups arrived at the bank of Sungai Tembeling almost simultaneously at 2.30 am, Thursday, 31st January. Participants were then started to unpack their bags in order to repack all the food items prepared by the organiser from the Engineering Campus together with the camping gears and other personal belongings. Most of the participants had sleepless night before the dawn arrived.

The first day of the expedition started with a big breakfast at a nearby nasi lemak stall by the river bank before the team embarked on a short boat ride crossing Sungai Tembeling to the National Park office on the other side of the river. 26 participants were then registered for permit application with the National Park officers while a couple of staff were busy checking everyone’s rucksack for things to be brought into the park area.

The team started the journey at 9.30 am towards the first camp site at Kuala Melantai. The flat trail within a lush undisturbed forest provides a rather fresh and calm environment to the fellow hikers. The group was also accompanied by 3 experienced guides namely; Engku, Ateh and Pak Long. Everyone reached the Melantai camping site at approximately 5 pm. The camp site by the river provided fresh water to the hikers especially for cooking purposes. However, with such crystal clear water rushing before everyone’s eyes, no one would not want to miss the opportunity soaking their feet and bathing before the sun set on Day-one of the expedition.

After dinner was served, participants had the chance to know each other in a simple introductory session. In a hiking world, each and every fellow hiker should know their companions as this is important should there be any mishaps and emergency along the route.

The second day started as early as 5.30 am with participants preparing their breakfast as well as packed lunch to be consumed en route to the next campsite; Kuala Putih. For some, they arrived as early as 7 pm but there were a few who reached the site as late as 9 pm that evening.

Day-3 was a rather challenging trail to the participants as they need to cross 6 rivers, which some with very fast stream of currents. Thus, “human rope” should be formed in order to avoid hikers from falling into the gushing river. Nonetheless, most of them were enjoying the fresh water in the scorching heat of the sun. The third campsite was just meters away from the last stream of river at Camp Teku in the area of Kuala Teku. The group arrived relatively early, at approximately 5 pm in the afternoon. Everyone had a good rest before the next challenge on Day-4. 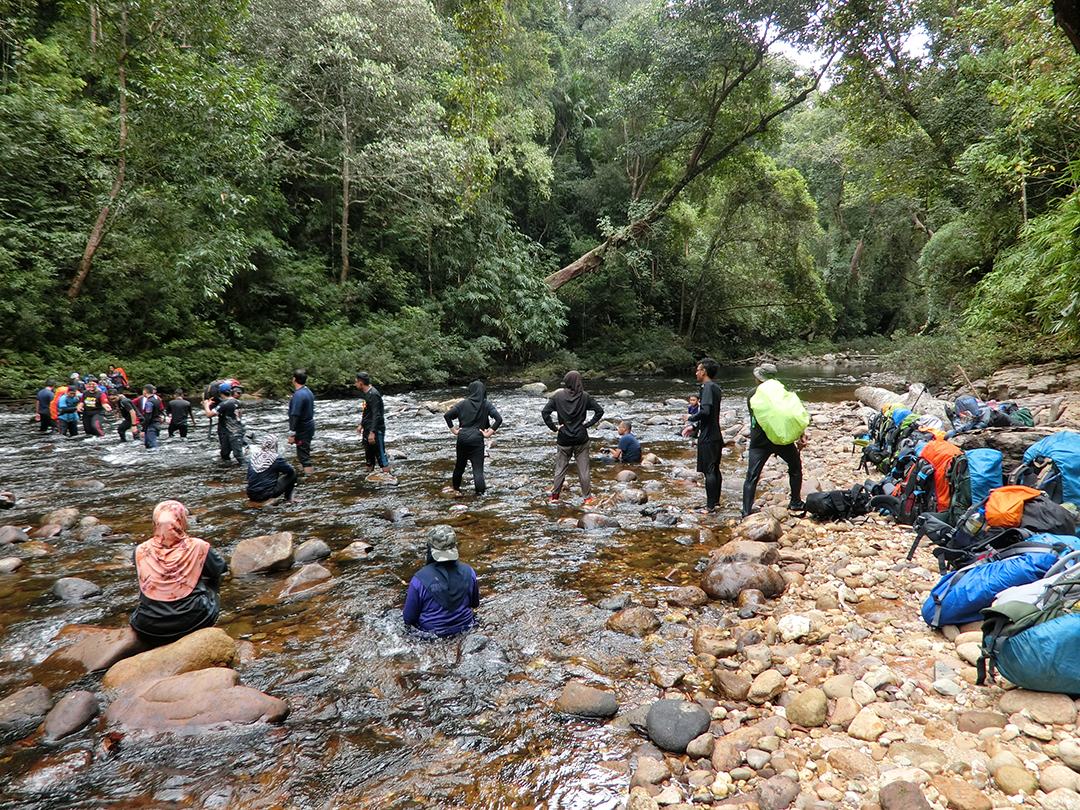 The third day would probably test the team spirit of the hiking comrades in helping each other crossing the rivers, however, the subsequent day offered quite different obstacles. From the elevation of 150 m above sea level, hikers were dared to climb up as high as 1500 m towards Camp Pangkin on top of Mount Pangkin; where the next stop was. The temperature in the evening started to plunge to as low as 15C. There were a few with drenched rucksacks and therefore damp clothes and sleeping bags, which led to freezing cold throughout the night.

The next morning on Day-5 was the day where hikers need to endure the muddy trail, 15 aluminium ladders and 90 slope towards Mount Gedung at 2085 m above sea level. This route perhaps the most gruelling trail among others and this was concurred by most of the first time hikers who joined the expedition. The gushing of freezing wind at nearly 7 pm that evening hampered the hike towards the summit. There were a few who reached the peak of Mount. 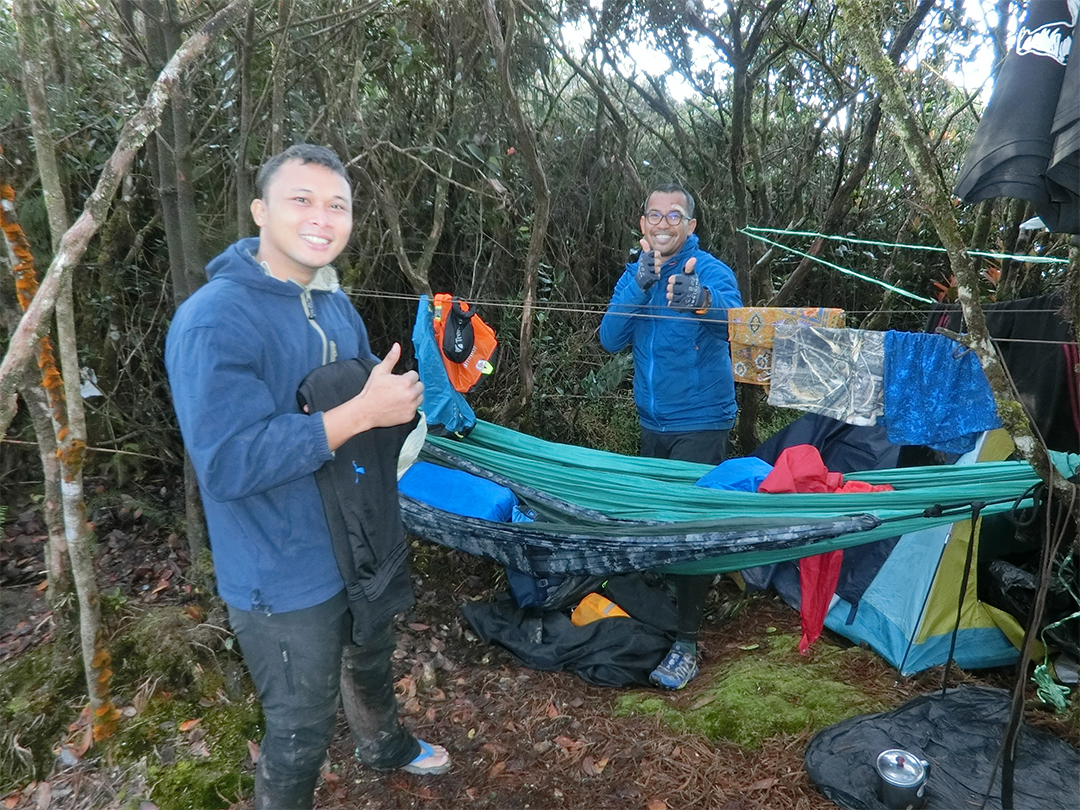 Tahan at 7.30 pm and there were some who managed to step foot at the summit campsite as late as 8.30 pm in the evening. Since it was a freezing night, most of the participants were snuggled in their individual sleeping bag and tents instead.

The new day on the summit started as early as 5.30 am as most of the hikers were targeting on getting the view of the sunrise on Mount Tahan. Right after Fajr prayer, some were ready at the edge of the peak for the magnificent view and some were preparing breakfast with hot tea and coffee for everyone to enjoy in the crisp cold morning. 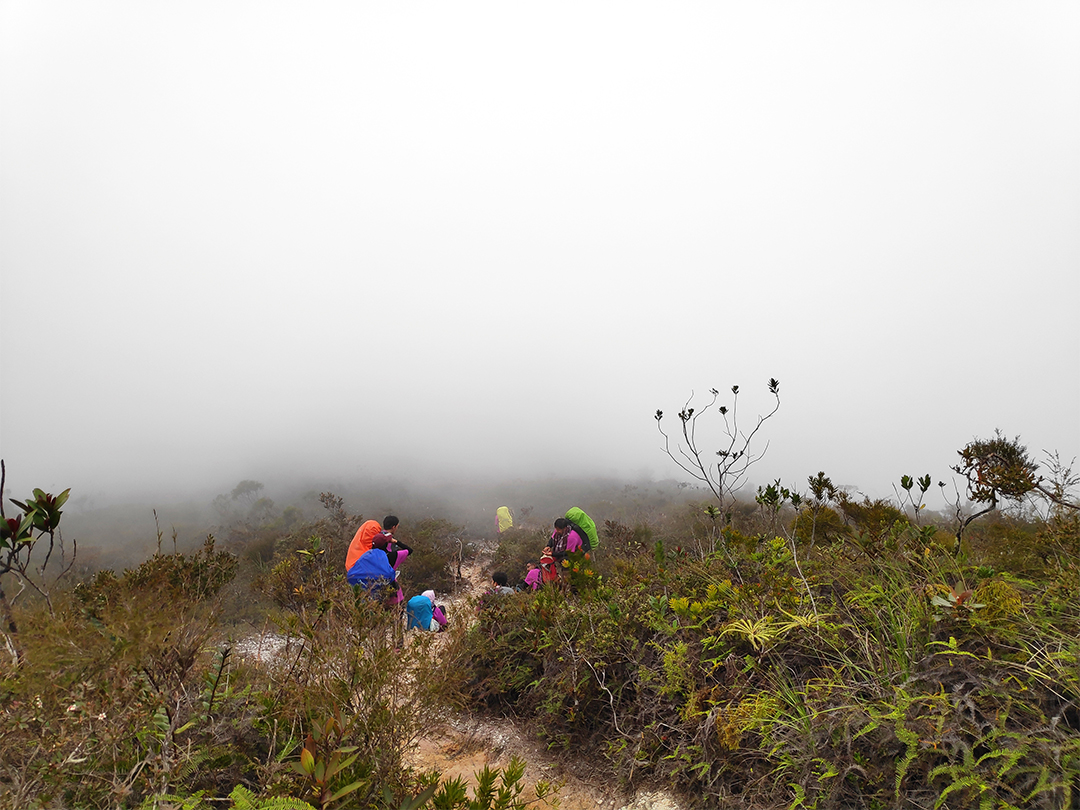 The satisfaction and pride were shown in everyone’s faces as a line-up was formed for a photo shoot at the highest peak in the Peninsular Malaysia. The team then prepared to descend the summit at 10.30 am towards Camp Kubang for a night stop and continued descending on the final day (Day-7) towards Kuala Juram. The expedition ends at 5.15 pm, Wednesday 6th February 2019. 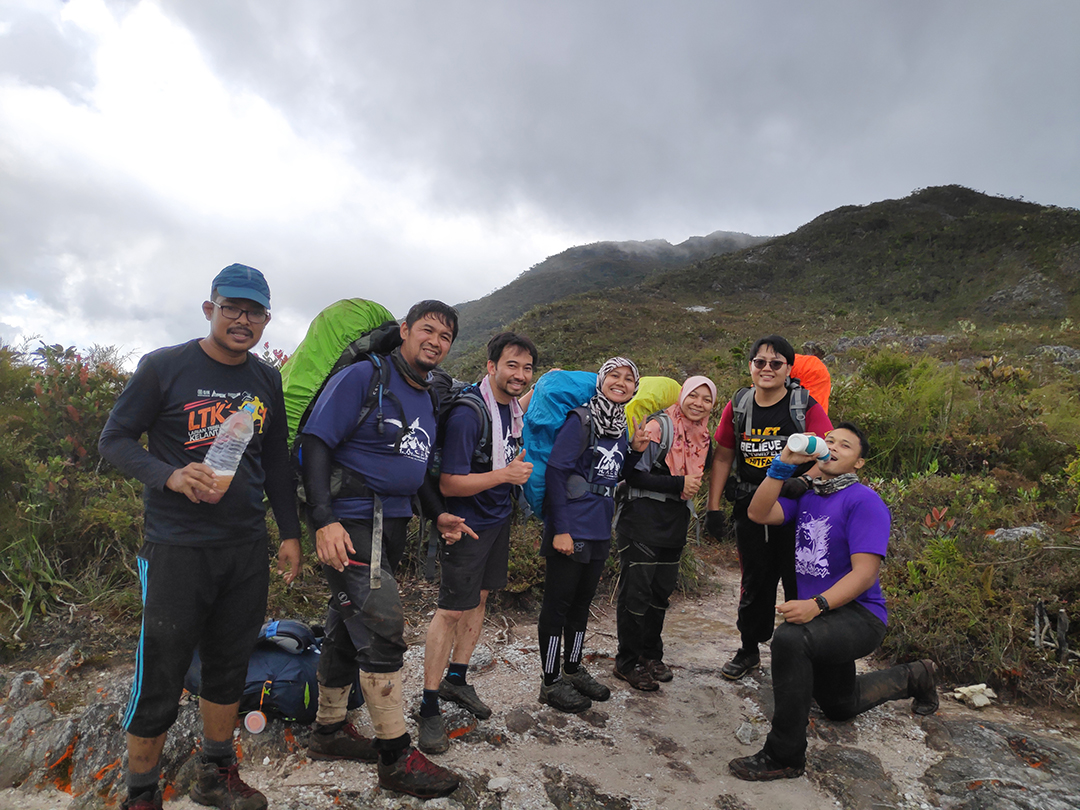 The 26 hikers from the Mount Tahan Expedition from the Engineering and Health Campuses wish the university a Happy 50th Anniversary. The hardship and challenges were endured as those individuals during the early years whom strived through thick and thin to build and establish the institution that everyone is proud of today.

May the motto We Lead fly higher in the next 50 years! 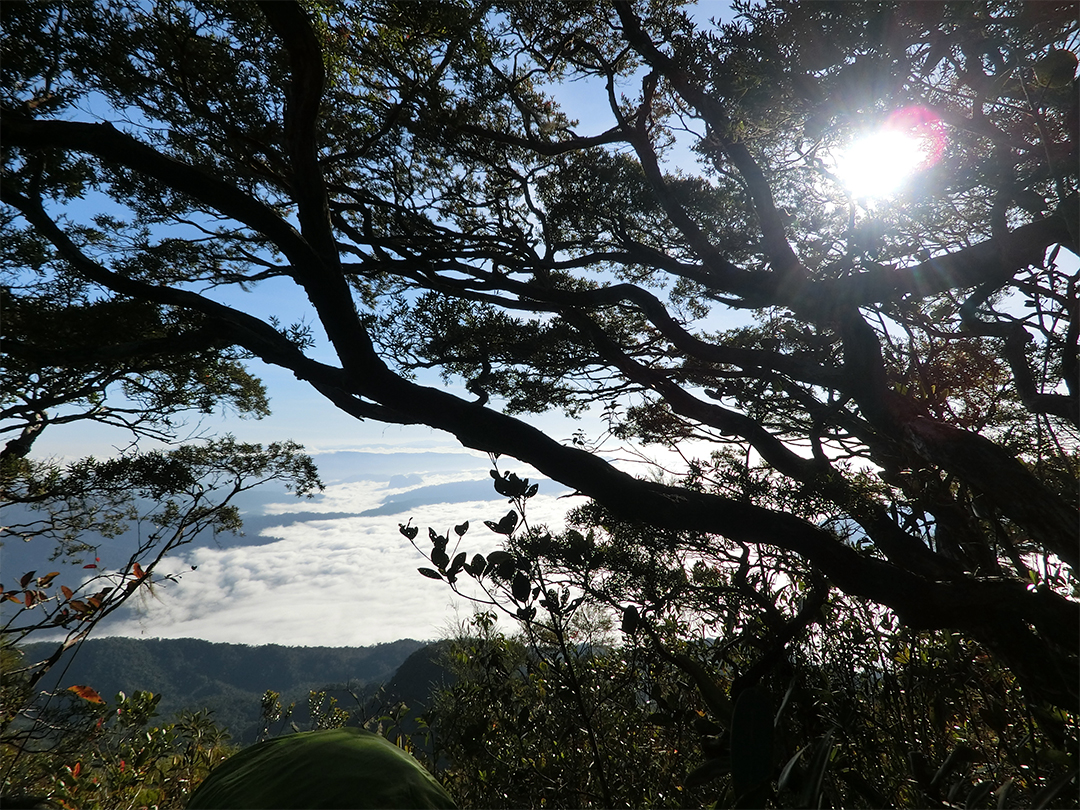 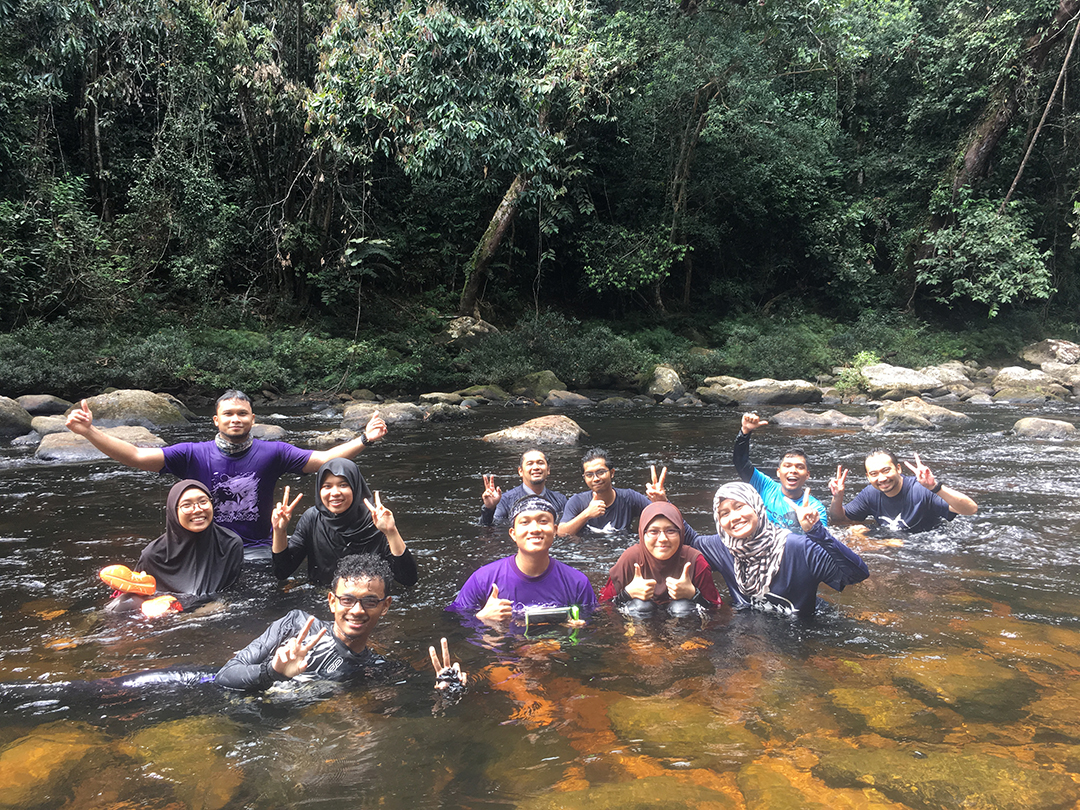