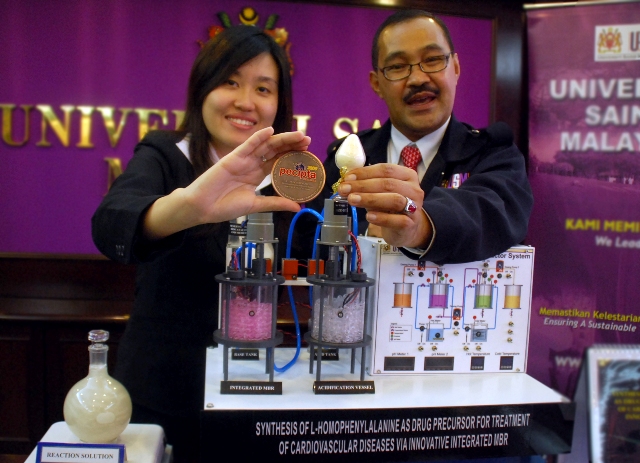 
L-homophenylalanine, a drug precursor, was developed using a biocatalytic method with a combination of enzyme and membrane technology. This method is far superior and is the first of its kind to be produced locally.


Developed by Profesor Abdul Latif Ahmad and his co-researchers Oh Pei Ching and Dr. Syamsul Rizal Abd Shukor from the School of Chemical Engineering, USM, this product is expected to bring huge benefits to the economy as well as the development of health for the bottom billion of the population.


Prof. Abdul Latif said that L-homophenylalanine is already in the market, but what differentiates it from their product is the method used to produce the drug precursor.He added that generally, the production of commercial L-homophenylalanine involves a complex chemical method, which is costly and can result in environmental pollution.
"So, in this study, we came up with a biocatalytic method that is scientifically proven to be better, avoids the use of hazardous chemical substances as well as the risks of extreme chemical reactions," he said.


He added that L-homophenylalanine was produced using a special bioreactor membrane-enzyme system where the design is more compact, complete with monitoring strategies and automatic controls. He said that the system used few chemical substances; involved moderate reactions; and supported green technology with the use of minimum equipment.


"With this integrated system, we are able to produce L-homophenylalanine which is pure, far superior in quality and eco-friendly and at a far cheaper cost.


Prof. Abdul Latif said that the cost for each gram of L-homophenylalanine produced locally is estimated at RM 2 500, which is much cheaper than the fully imported commercial product, that costs between RM 9 000 to RM 11 000.


He added that the four-year research began in 2006 through a University Research Grant of RM 500 000.

On his hopes regarding the product, he said," The ultimate aim of this research is to produce cardiovascular medication that is cheaper and more accessible to the public."


He added that L-homophenylalanine is expected to be sold to the pharmaceutical industry or research institutions for the purpose of producing drugs for the treatment of cardiovascular diseases which have already claimed 17 million lives throughout the world.


"L-homophenylalanine is not the end product; on the other hand, it is an important element used in the preparation of cardiovascular drugs such as enalapril, delapril, lisinopril, quinapril and others," he said.